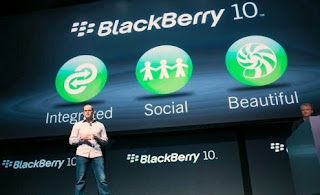 On this Friday the global smartphone making company BlackBerry recorded an unexpected loss in the first quarter of current fiscal year. As a result of that its shares slipped down in the pre-market trading, and the company didn’t even succeed to reveal how many units of its latest BlackBerry products were sold worldwide.

A large number of market experts and trade analysts were eagerly waiting to have a firm look on how the BlackBerry's latest addition Z10, which is its first ever touchscreen model, managed to do business for a full quarter (read Q1) in the potential market of the United States. But all of them were vastly disappointed as BlackBerry only announced that it shipped around 6.8 million units including the older models too in that period of time.

It has to be added here that the mobile handset making company had managed to ship 7.8 million phones last year for the same quarter, which means this year’s overall number of shipments were reduced by a million.

Earlier we had mentioned here that currently BlackBerry is in the process of making a solid comeback in the worldwide smartphone base. It eventually introduced the new Blackberry 10 operating system along with the launch of two new models BlackBerry Z10 and BlackBerry Q10 to boost up the comeback campaign. But sadly in the premarket trading the shares of BlackBerry slipped down $2.57 or 17.8%, to $11.91.

Adobe Records $1.01 Billion Profit in 2nd Quarter
The Canada based company declared that it lost a huge $84 million (or 16 cents a share) in the three months period of the first quarter that ended on June 1, 2013. It also said that its total revenue stood at $3.1 billion. Here we should add that BlackBerry had lost $518 million (or 99 cents a share) for the same period of time of the previous year.

Many trade analysts had predicted that BlackBerry might earn 5 cents a share on the overall revenue of $3.37 billion. This simply means the loss is pretty unexpected, and it eventually slowed down the comeback process of the brand. Now the whole comeback trails have gone into serious doubts, which is not good news at all for the BlackBerry lovers.

BlackBerry added that according to their won estimation it will post an operating loss even in the second quarter, which means happy days are still far away for the company.

"The smartphone market remains highly competitive, making it difficult to estimate units, revenue and levels of profitability," it published this in an official statement.

Colin Gillis, who is an analyst at BGC Partners, showed his concern for BlackBerry. He said that in the present day’s scenario it’s not that much easy to make serious profits on handsets. This means BlackBerry will have to struggle for existence in the days to came, as the things are not looking great for the Canadian company.

"There are a lot of people that haven't been able to make it happen. For all the talk about Apple and Samsung, there is companies like Nokia and HTC," Gillis quoted.


Now the main concern is how well BlackBerry will be able to deal with this unexpected loss. Once it was the king of worldwide smartphone market, but nowadays it has been fading away in steady manner.

Do you love BlackBerry devices? What are your thoughts on this loss of the company? Please share with us. We would like to hear from you all.