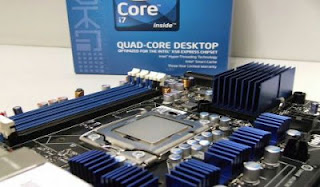 These new processors are based on the Intel’s own flagship 22nm Haswell micro-architecture, which is first of its own kind. It has been designed mainly for the Ultrabooks, which are the latest trends among the gadget freaks for sure.

The 4th generation Intel Core processors can easily deliver better battery life over any other previous generations of processors. According to the company itself it can increase the battery life up to 50 percent in active work situations, which is pretty huge indeed. The company added that it is the best ever generation-over-generation development and the Ultrabooks that would run the new processors might be able to enjoy more than 9 hours of battery life without any trouble an active work scenario.

Intel's latest Core processors are also the first ever SoCs (system on chip) for personal computers and various new cool gadgets and devices including the Ultrabooks will be powered by it in a portable all-in-one and two-in-one designs.


Intel’s own systems that are relied on the quad-core version of the new 4th generation processors are also available now in the several key markets worldwide. The company announced that a few additional versions are too in the cart, and it will be available to the users in the coming months.

It has to be added here that on the last Monday two leading tech companies Acer and Asus had launched their latest Ultrabooks by announcing that these will be powered on by the 4th generation Intel Core processor (Haswell). Asus had even unveiled another device the Transformer Book Trio with a specially designed docking station empowered by the fourth generation Intel Core i7 processor. Dell had already announced its XPS 11 which is also supported by the Intel’s latest processors. According to some market experts Apple too will soon launch a revised Retina MacBook Pro line up that will eventually be powered by these new processors. We shouldn’t forget that Nokia is developing its own Tablet along with Lumia EOS.

Tom Kilroy, who is the current Executive Vice President of Intel, spoke a few things at the event of Computex Taipei 2013. He said that his company presently has a little more than 50 different two-in-one design in its carts, including premium Ultrabook 2-in-1s and some other like this. These designs are mainly powered by the new Intel Core processors and the company’s upcoming processors which will be offered on the 22nm Silvermont micro-architecture.

He also hinted that Intel’s most powerful Intel Atom system-on-chip for tablets, which was previously codenamed as "Bay Trail-T", will be available later in 2013 during the Christmas holidays (most probably). The company will also offer its next generation 22nm quad-core processors at that time, he added. Intel is currently working on its forthcoming 4G LTE device and its next-generation 22nm Atom SoC, which was previously codenamed as “Merrifield”, for the latest smartphones.

Here is a small excerpt of the speech of Mr. Tom Kilroy in the Computex 2013 event in Taipei.

"Today we deliver on the vision set forth 2 years ago to reinvent the laptop with the introduction of our fourth generation Intel Core processors that were designed from the ground up for the Ultrabook and serve as the foundation for a new era of 2-in-1 computing," said Kilroy. "We made one of the most seismic changes to our roadmap ever to build these new Core processors that deliver the stunning performance of the PC and the mobility of a tablet in one device. The new processors power the most exciting 2-in-1 designs to-date.

With the new Intel Core processors introduced today, our next-generation Atom SoC for tablets and other 22nm products coming soon, the advances in Intel architecture are accelerating the pace of innovation, enabling new experiences and powering some of the best mobile devices coming to market this year.”

What is your expectation from these latest offerings of Intel? Do tell us by commenting below. If you like this article and want to encourage us to serve you more with all the latest tech happenings then do share this post in various social networks.