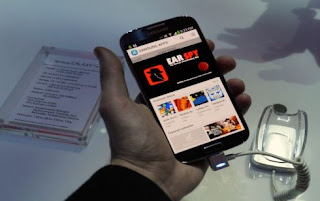 The world’s largest smartphone maker Samsung Electronics announced that the overall number of sales of its latest offering Galaxy S4 have crossed 10 million mark. This smartphone was launched in late April of this year, and it earned the tag of fastest selling smartphone of the company with these solid sales outcomes.

On this Thursday, Samsung announced that it will expand the sales of Galaxy S4 to 327 carriers in 155 countries BY June 2013. The Korean tech firm is giving the full priority on the global role out plan of action to its best device till date. S4 released in India 26th April with a price tag of Rs 41,500. Eventually it is selling in the markets of around 60 countries including the likes of United States, United Kingdom, and some leading European countries.

Samsung launched S4 to counter the popular iPhone series of Apple Inc., and till now it has been able to keep an upper edge to its competitor. The demand for this smartphone device is increasing with every day, even the distributors are pushing the suppliers for more and more units. In fact the supply issues have also snarled the US role out procedure through some of the carriers of the company.

The reason for this super success of S4 is that, it has been able to create a buzz in the global smartphone market since its inception. Sensing these demands, Samsung has decided to increase the high-end smartphone market size in countries like India. S4 has reported solid sales in almost all the countries that it has targeted for.

The Korean company reported a sharp increase of 42% in profits in the last quarter only, and the experts are predicting that it may surpassed this in the next quarter with the help of its latest flagship S4 devices. Samsung, which debuted in 2010 only, is currently leading the global smartphone market, which has a total market size of $225 billion.

Here is the some of the cool features of the S4, which is making it the standalone than the other devices of its kind. It can be used for 'gesture-control', and it has 2 mega pixel front and 13 mega pixel rear camera, a five-inch full HD super AMOLED touchscreen, and many other mind-blowing facilities. It also supports 3G and Wi-Fi networks, and the best part is the company is offering easy EMI and Cash back schemes to own the device, which is an another reason for this super successful turnout in matter of sales. The success of a device or gadget or any products vastly depend on its affordability, and that’s why even the tech giants like Microsoft is giving away ‘Windows 8’ update for free.

The technological world is growing super fast, and the people love to have latest gadgets on their acquisition. After sensing this internet giant Google has started to work on its innovative “Google Glass” project, which is likely to launch later this year only.

Apple hasn’t launched any new products that can be able to compete with the likes of S4 in last few months, and that gave the Samsung device an added advantage to dominant the market. It received mixed reviews from the various gadget experts, but that didn’t affect its sale outcomes, as it has benefited from heavy marketing plans.

The trade analysts of JP Morgan are expecting that Samsung will be able to beat the operation profits of Apple in this quarter for the first time in years. Currently the Korean firm owns a record 33 percent of the total worldwide smartphone market in the first quarter of 2013.

Have you owned the Galaxy S4 yet? Which is currently the best smartphone of the world? Do tell us in comments box below. If you like this article, then please “like” it, “tweet” it, “+1” it in your favorite social networks.